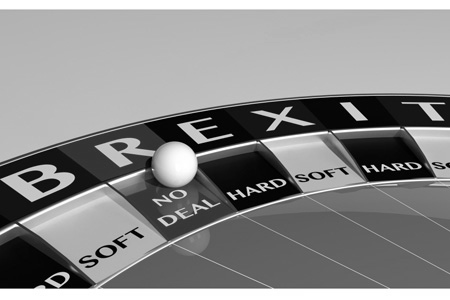 he Department for Business, Energy and Industrial Strategy (“BEIS”) published a notice (on 12 October 2018) which aims to explain the effects that a no-deal Brexit might have on legal entities operating across UK-EU borders. That notice is part of a series of no less than 25 technical notes published by BEIS which aim to provide some guidance for a no-deal Brexit to those EU businesses operating in the UK and vice versa.

Deal or no deal

A no-deal Brexit will occur if the UK Government and the representatives of the European Parliament are unable to agree and sign a binding withdrawal agreement that is then ratified by the UK Parliament and the European Parliament. The EU representatives and the UK Government have been working towards that agreement since the latter triggered Article 50 of the Treaty of the European Union on 29 March 2017. Last month, Theresa May brought back a draft copy of the deal from Brussels; and it is fair to say that, save for the Prime Minister, nobody much in UK politics seems to like it.

A no-deal scenario is the much discussed ‘cliff edge’ Brexit, where all EU law currently in force in the UK would overnight cease to be in effect on 29 March 2019. However, under the EU Withdrawal Act 2018 any EU law that was in effect the day before Brexit will be deemed to be continuing the day after (although what that means in practice at the granular level of day-to-day business may be less clear).

Businesses operating in both the UK and elsewhere in the EU will no doubt be closely following developments, wondering what fortunes 2019 will bring.

For now, the UK remains subject to the rules and regulations of the EU which apply to companies operating within the single market.

Companies incorporated in an EU member state and which operate in the UK are principally regulated by the Companies Act 2006, relevant EU law and of course the laws of their ‘home’ state.

By contrast, companies which were not incorporated in an EU member state (which for now includes the UK) are referred to for the purposes of the relevant UK legislation as ‘third-country businesses’; and their operation in the UK is principally regulated by the Overseas Companies Regulations 2009.

UK and EU company regulation in a no-deal scenario

If the UK leaves the EU without a deal in place, the Government will need to look at whether the sudden absence of relevant EU law causes issues for EU incorporated companies that continue to operate in the UK. The Government intends to address any such issues by using the powers granted to it by the EU Withdrawal Act 2018 to ensure that the status quo continues the day after Brexit and beyond, which can subsequently be changed by UK legislation (without relevance to the EU) of course.

For companies incorporated outside the EU but operating in the UK, the legislative regime will remain much the same and the Overseas Companies Regulations 2009 will continue to apply.

For Societas Europaea (“SE”) that are registered in the UK and have failed to make alternative arrangements before Brexit, the Government will automatically convert them into a UK corporate structure (i.e. UK Societas) to give them legal status post exit. The conversion mechanisms are included in the Draft European Public Limited-Liability Company (Amendments etc.) (EU Exit) Regulations 2018. Furthermore, those regulations would amend EU law in order to provide that it will no longer be possible to form a SE in the UK upon the country’s withdrawal from the EU.

Limited liability status of the UK corporates operating in the EU

Somewhat alarmingly, the limited liability status of UK companies and LLPs with their central administration or principal place of business in certain EU member states may no longer be recognised in those member states. This is certainly an issue to be looked at for any UK companies or LLPs operating in jurisdictions where the ‘real seat’ principle of incorporation applies (i.e. jurisdictions where applicable laws and place of incorporation is looked at on an objective basis by reference to where management and control sit and where the business is actually taking place).

Furthermore, it would appear that cross-border mergers involving UK companies will no longer be able to take place under the Cross-Border Mergers Directive, although an analysis of the consequences of this is beyond the scope of this Bulletin. Clearly anyone involved in a UK/EU merger of some kind right now will have their foot to the floor trying to complete before Brexit takes place on 29 March 2019 (barring an agreement to extend or the UK deciding to stop the process).

The UK does not apply nationality restrictions to managers and owners of UK companies, and so there should be no such restrictions suddenly applying in a no-deal scenario.

In a no-deal Brexit scenario, the UK would be considered a ‘third country’ by opposition to member state. And therefore, the rights of UK citizens to own, manage or direct a company incorporated in the EU may change (and may change depending on the sector and/or EU state in which the company operates).  UK citizens should be alive to the fact that in a no-deal scenario they may face restrictions as regards nationality or residency if serving as a director of a company incorporated in an EU member state.

Further, in a no-deal scenario, UK investors, funds and businesses may find that they are subject to restrictions on the amount of equity they can hold in businesses in some sectors within some EU states.  The example given by BEIS is that “a UK audit firm could no longer be the majority owner of an EU audit firm because it would no longer be recognised among the majority of qualified owners or managers that an EU audit firm is required to have under EU law”.

Much depends on whether the UK Parliament will vote through Theresa May’s deal in the New Year, and whether the Prime Minister can obtain any improved terms to that deal from the EU before that vote takes place.

Whether Brexit is causing you to think about the structure of your business or you simply want to discuss any of the issues raised in this Bulletin further please do contact us at enquiries@humphreys.law; our team is available to advise.